Henry Wagons is all set to reprise his role as Warren Zevon in the stunning new Australian production ZEVON – ACCIDENTALLY LIKE A MARTYR! Following a critically acclaimed preview season at The Athenaeum Theatre in October 2019 ZEVON – ACCIDENTALLY LIKE A MARTYR is back!  Tickets fairly flew out the door for those shows so get in quick for this limited run!SHOW DATES: 25 April – West Gippsland Arts Centre, Warragul28 April – The Gov, Adelaide30 April – The Palms at Crown, Melbourne PRESALE STARTS TUESDAY 9 FEBRUARYGP ON SALE THURSDAY 11 FEBRUARY Sale link for all tickets – www.theprestigepresents.com.au/zevon Henry says, “I am thrilled to be playing the music of a true mastermind of song. Zevon, cheekily and charmingly, spins a lyric and winds a melody like no other. Even now, when I’m deep inside his catalogue, my jaw still drops at least once in every song at a random pearl of wisdom. We truly have one hell of a set list to share.”   ZEVON – ACCIDENTALLY LIKE A MARTYR is under the musical direction of Lachlan Bryan who says ”Zevon’s songs are dark, funny and brilliant all at once. It’s been a great pleasure to immerse myself in them, and I can’t wait to bring them to life again with this killer band of fine musicians and people.” STARRING:HENRY WAGONS – VOCALS/GUITAR/PIANOLACHLAN BRYAN – MUSICAL DIRECTOR/PIANO/VOCALSHOLLY E. THOMAS – DRUMS/VOCALSDAMIAN CAFARELLA – BASS/DRUMS/GUITAR/VOCALSMICHAEL HUBBARD – GUITARS/VOCALSHenry Wagons will once again inhabit the colourful lyrical world of Warren Zevon’s songs, breathing new life into Zevon’s visible hits Werewolves of London, Lawyers, Guns & Money and Excitable Boy.  Warren Zevon was the songwriter’s songwriter. Bob Dylan and Bruce Springsteen covered his songs. Linda Ronstadt had massive hits with Poor Poor Pitiful Me and Carmelita. Jackson Browne was his producer and he called David Letterman his greatest champion Zevon had a turbulent, erratic relationship with loved ones, supporters and the music industry in general, fuelled by alcohol and drugs extravagance, which no doubt contributed to him becoming a cult figure rather than a majorstar. His songs captured the dark, colourful eccentricities and extremes of Los Angeles, his life and early death. His great passion was literature the crime writers of the day and he was their favourite songwriter.ZEVON – ACCIDENTALLY LIKE A MARTYR allows master craftsman of the stage and multi-media star, Henry Wagons the opportunity to explore and interpret some of rock’s greatest lyrics. Musical Director Lachlan Bryan and The Martyrs honour the songs. The producers, along with Henry and Lachlan, as the joint creators, have chosen to focus on the songs; to acknowledge the man’s life and to shine light where darkness may have prevailed. The intention is to leave ’em smiling and their preview performances delivered as promised.From heretic to heroic – ZEVON – ACCIDENTALLY LIKE A MARTYR by HENRY WAGONS is a marriage of rare convenience. Facebook link: https://www.facebook.com/ThePrestigePresentsWebsite: www.theprestigepresents.com.au/zevonTwitter: https://twitter.com/HenryWagonsDownload Hi Res image here:https://www.dropbox.com/s/mt4ap9ed347w85a/Henry_Zevon_Key%20image_A4.jpg?dl=0 “Zevon – Accidentally Like A Martyr is informal, intimate, lawless and most of all fun.” – Greg Phillips, Australian Musician “Go for the songs, stay for the banter and relive ‘the one who got away’ Warren Zevon. Henry Wagons and Lachlan Bryan do him proud.” – Paul Cashmere, Noise 11, I Heart Radio  ZEVON – ACCIDENTALLY LIKE A MARTYR is presented by The Prestige Presents and Beatroot Productions. Please ring Karen on 0400 527 365 or email Karen@karenconradpublicity.comfor interviews/images and more information/review passes/interviews.

Happy Christmas! May your pudding be figgy, your Lords be Leaping and The Grinch carve the Roast Beast at your house! I am so looking forward to a family and friends time and a better 2021. Here’s to y’all, hanging in there through thick and thin, surviving and thriving in this crazy year. To all my music and events friends, so good to see our scene coming alive again, slowly but surely. Happy Christmas to you and all your near ones and dear ones. See you next year for bigger and better things. Peace. Out. xox 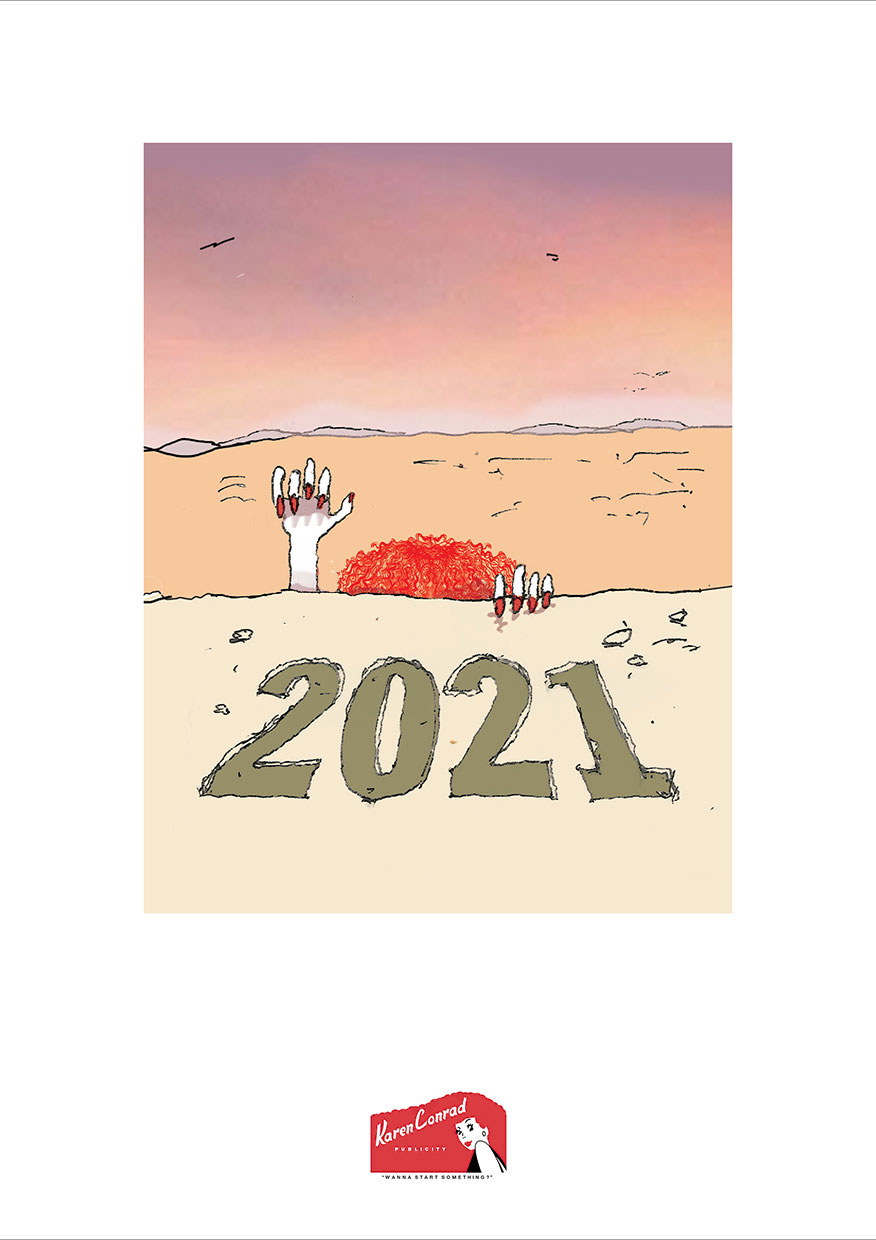 Always a variety show with a difference, LaNCE TV will shed its standard jaunty and boisterous format to host this special day by featuring an expert panel of notable trans* voices from across urban and regional Victoria.

Being part of the broader rainbow family, means we must hold space for all voices to share their stories.

Transgender Day of Remembrance is the annual observance, on 20 November, to honour the memory of those who have lost their lives due to acts of anti-transgender violence.

Now in its third year, LaNCE TV streams live from Ballarat in Western Victoria and shares the love directly from C31 in Geelong and Melbourne and also to Facebook every Friday night from at 9pm AEST.

Lance DeBoyle and Gabriella Labucci look forward to bringing you this thought-provoking and heartfelt episode in remembrance.

For interviews/photos/media queries please email or ring Karen at Karen@karenconradpublicity.com or on 0400 527 365

We all miss you here on this spinning rock, so I thought I’d record a few of your most celebrated songs. Just a little birthday tribute to you and all of us who love your touching heartfelt words and music.

I hope you like my interpretations of your works and enjoy listening to them as much as I have enjoyed recording them. I’d like to thank you, Leonard, for writing some of the greatest songs of all time. Your words and are so truthful and have given me the drive and reason to keep making musical art. Even during global Pandemic, your words shine like diamonds in the dark.

Due to the pandemic the band and I are unable do a proper live performance of these works until March 2021. So in light of this, here is a YouTube link to the album.

You can also stream it on Spotify later this month, in case you have streaming devices in The Great Beyond.

You were so right, Leonard, there is a crack in everything and that’s how the light gets in.

Much Respect and Many Thanks to you on your birthday.

Cam Giles—D A R K E R The Songs Of Leonard Cohen is out through Ambition Entertainment / Sony.
camgiles.com

“Funklords Lake Minnetonka have been bringing infectious jazz riffs and bouncing funk beats to Melbourne since 2013, jetting between hometown Melbourne and the soulful Minneapolis that has been influencing their sound.”—Speaker TV

END_OF_DOCUMENT_TOKEN_TO_BE_REPLACED

At a time when the second lockdown in Melbourne is hitting the mental health of young people particularly hard, a Melbourne hip hop group has released a song about coming back from the brink of suicide in the hope that young people, like them, will realise there is another way.  END_OF_DOCUMENT_TOKEN_TO_BE_REPLACED